The other day I had to go up to Coolangatta to pick up my parents from the airport, so I called in at Boyds Bay Garden World on the way. It’s a lovely nursery, and it’s only about five minutes away from the airport, so it gave me something to think about during the drive.

I was hoping to buy some succulents. Last time I was there – the only other time I’ve been there – they had lots, and I bought three. But this time when I got to the nursery and found they had hardly any succulents at the moment, and none that I wanted to buy, it was so disappointing I nearly cried. It was so sad it wasn’t even funny. (Usually if I’m about to cry about something so silly I can laugh at myself. But this was just genuinely sad. I’d really been looking forward to those new little plants.)

This little red bromeliad is a Neoregelia sp. ‘Fireball’: 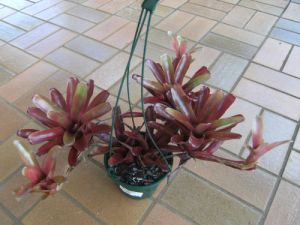 This plant has lived in the USA since importation from Brazil in the 1960s, but it still hasn’t been officially named yet. That seems unbelievable. (If you’re interested in the history or the mystery, see Solving the Fireball mystery by Nat DeLeon, the man who imported the plant into the USA in 1960, bought from a plant collector in Brazil, Walter Doering). The plant name I’ve used – Neoregelia sp. ‘Fireball’ – is the equivalent of a common name, I guess, just written in a botanical-name format: Genus (Neoregelia) species (unknown, so expressed as “sp.“) cultivar (I still don’t understand what a cultivar is, but in this instance, whatever it is, it’s called “Fireball“). There’s a good introduction to plant names at Australia’s Virtual Herbarium, if you like that sort of thing.

Anyway, this plant is beautiful. And it even came with a bonus spider! (I’m actually getting a bit tired of giving warnings about spiders, and it seems silly to do it when there are so many other fears or phobias that might need a warning too. What if you’re scared of bromeliads, hey, Reader? I didn’t warn you about that, did I? But I nearly fell over a picture of a snake the other day while reading a website about something completely unrelated – no warning, just suddenly it was there – which just strengthened my resolve to always warn about something if I know it might provoke fear. So, if you’re scared of spiders, don’t look past the dividing line at the end of this post – that’s where I’ll put the photo of this bonus spider.

The plant was actually two plants in one pot, but when repotting I kept them together; if they’d been separated they would have looked lopsided. There were three pups (offsets) growing around the outside of the plant, so I snipped them off and will pot them up tomorrow when the cut stems will have dried. I’m planning to do a bit of a test: I’ll pot one in perlite, one in Searle’s Propagating Mix, and one in Brunnings Orchid Potting Mix (‘ideal for cymbidium orchids’, in case they make a few different types).

Here’s one of the pups after I’d removed the lower leaves and trimmed its stem back to about 2cm: 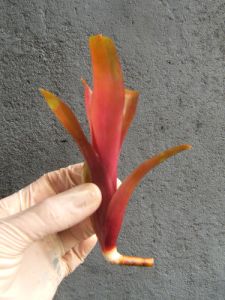 And here’s the adult plant, showing the roots (if you can see any) and original potting mix:

I teased out some of the old potting mix, and then repotted using the Brunnings mix mentioned above. Fingers crossed it’s in the right sort of medium for good growth. I’ve got to start learning about soil, dammit. I don’t know anything.

It was raining for much of today, so I couldn’t work out where the best sun will be. The plant might end up being trucked around the backyard for a few weeks before settling in somewhere; I think the bromeliad corner under the tree will be too shady for it to live there permanently. I’ve read that the general rule with coloured bromeliads is to give them as much sun as they can take safely, without being bleached or sunburnt, but as yet I’ve got no idea how much that might be. 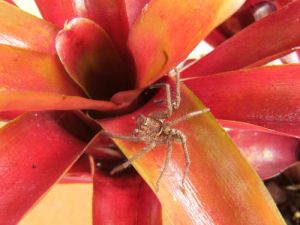 This little spider stayed with the plant all the way home. It was a hot and humid day, so before driving away from the nursery I packed the plant into an insulated shopping bag that’s normally used for frozen food, and put a frozen brick thing outside it. Then I went to the airport and sat around inside waiting for over an hour (the plant and spider were stuck outside in the car), and then the drive home took about an hour. So, all up: a long trip for a little spider. I hope it’s okay. I hope it doesn’t miss living at the nursery; it might have had friends and family back there. I also wonder whether any of the nursery workers ever used to notice it. I guess they probably don’t have time for much wildlife exploration, but you never know.

I put the bromeliad under a tree when I got home, and I haven’t seen the little spider since then.

Greetings, reader. My nickname is Deirdre, and this is my journal. I hope you enjoy looking around.